Reading Gender and Sexuality in the Avatar 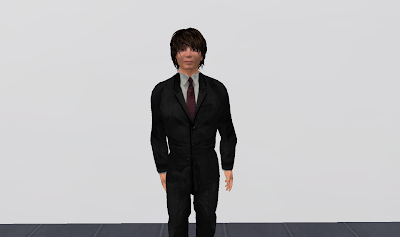 "There is no self that is prior to the convergence or who maintains 'integrity' prior to its entrance into this conflicted cultural field. There is only the taking up of the tools where they lie, where the very ’taking up’ is enabled by the tool lying there”. - Judith Butler (1990 145)

This is a still image of my avatar in Second Life. It has no biological sex, no genitals or DNA that identifies it according to a scientific standard as male. However, it is consistently referred to by myself and others as 'he' or 'him' and the things it owns as 'his'. Visually, this avatar presents as male and the above image illustrates this 'maleness' in a contemporary style. The business suit, hair style and physical features indicate to me a form of 'soft masculinity', with influence from some of the androgynous gender tropes from popular culture. Lack of facial hair, long eye lashes, large eyes, longish hair style, slight build that lacks developed muscle definition, and thin hips add to the androgyny of the avatar. The image of the avatar is not suffused with sexual imagery and the erotic zones of the body are not emphasized in gender specific ways. The lips are one area of the body that can carry erotic connotation in particular cultures (both male and female) and these are somewhat emphasized with the avatar. The soft masculinity of the avatar can be related to a larger masculine culture in East Asia, where male bodies are represented without excessive muscles or hair and attention is paid to cosmetics and appearance preparation. This video is an example of such a soft masculinity:

South Korean idol boy band, Dong Bang Shin Ki singing Under My Skin in 2008, (Notice the avatar-like flying of some of the characters) Further analysis of this video and "mu-kuk-jok 'soft masculinity'" is HERE

Apart from the visual appearance of the avatar in regards to gender and sexuality there is also the concept of performing gender. My avatar performs as a predominantly heterosexual identity in Second Life. While stereotyping plays a large role in the performance of heterosexuality masculinity, the attributes of my own avatar that indicates a predominately hetero-orientation can be the same that indicate androgyny; lack of overt sexualized physical attributes, a gender-neutral physical stance and movements, and the absence of queer, bi or gay (HTB) symbols in reference to what is considered the so-called 'default sexuality' (i.e. heteronormativity).

I presented my avatar to students yesterday as "fairly standard in regards to gender" and it was only while thinking about it further today that I understood what this can mean. The opening quote, "There is only the taking up of the tools where they lie, where the very ’taking up’ is enabled by the tool lying there” from Judith Butler is very much about the components of gender performance. When we work in virtual worlds we operate under the same rules to which Butler refers. What is available is what people can use to identify socially with gender and sexuality. Agency emerges from this range of possibilities according to what is tolerated, permitted and encouraged in the "conflicted cultural field"..

The avatar above references symbols of soft-masculine power in the suit, formal qualities (expensive clothes, neck tie) and attention to appearance. These factors ally power with economic wealth in the formation of identity. These qualities are surprisingly similar to many of the images from the video of the South Korean pop band. The role of my avatar in my job influences the references and values I represent within it. I have attempted to build connections between agency and power in my avatar by referencing formal qualities in male contexts. The technological aspects of my job can be related to the East Asian cultural reference where a stereotype of a technical mediated identity is common. I also think about Science Fiction novels, especially those by William Gibson, and the ways they portray East Asia as a digital society where gender-ambiguous figures move freely in information spaces.

In performing the above reading I considered the following:

- Performativity: We have talked about gender being created performatively by our everyday practices. In this sense the practice of creating avatars is part of the process of creating gender. So how do the avatars (re)produce gender stereotypes? How do they exceed them?

- Representations of gender and sexuality: as both representing what is not present (the avatar representing 'me' in SL, the avatar's gender representing cultural notions/norms of gender such as the heteronormative), and as actually creating/being what is thus represented (and never just 'mirroring' the student, or cultural notions/norms). So, what do the avatars create when it comes to gender/sexuality? What do they think of the potential political power behind this kinds of representations? Do you think about the looks of the avatar's as being feminist in any sense? If so - how?

- The Butler quote: "There is only the taking up of the tools where they lie, where the very ’taking up’ is enabled by the tool lying there”. This is somewhat difficult to grasp, but virtual worlds are good examples in order to illustrate it, since "the tools" (for performed gender for example) are on the one hand per-determined by the architecture of the computer program, and on the other hand, as is the case with Second Life the tools for the manipulation of gender imagery and performance are many.

- Agency: The above also relates to agency, and having a choice (although always conditioned by the "convergence or who maintains 'integrity' prior to its entrance into this conflicted cultural field").

- Gender is said to be the prime thing in people's identifications and in identifications of others. So what choices are made in relation to identify and identification in the construction of the avatar? Initially it is necessary to decide whether the avatar is male or female (which is of course an interesting thing in itself). Why does one choose the avatar's gender as the same as my own? Why does one choose an oppositional gender? In relation to becoming a subject occurring in relation to subjecting oneself to different norms (for example gender norms). In a virtual environment simulations of gender performance can be experimented with. My avatar is not specifically incomprehensible and this is a result of reference to standard contemporary gender norms .

For further references to avatars, agency and the representation and performance of Self see HERE.
Posted by James Barrett at 4:06 AM

ROBLOX is driven by an ever growing membership base of more than 300,000 creators who provide an infinite variety of highly immersive experiences.

These experiences range from 3D multiplayer games and competitions, to interactive adventures where friends can take on new identities exploring what it would be like to be a dinosaur, a miner working a mine or an astronaut on a space exploration.