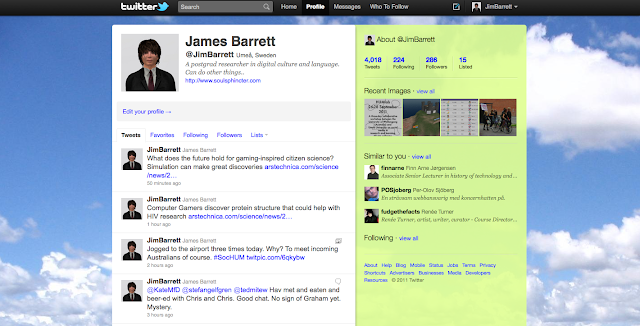 Twitter is a log-in web 'micro-blogging' service where users can follow each other as they post 140 character entries in a scrolling feed of short messages, links, updates, bookmarks and referrals (re-tweets). It was founded in 2006 and currently has 11 million active accounts. 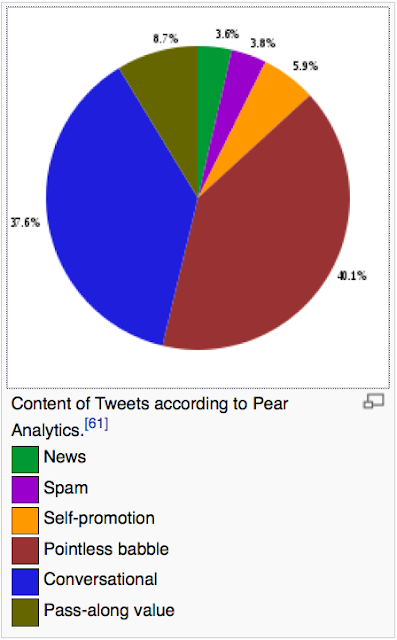 San Antonio-based market-research firm Pear Analytics analyzed 2,000 tweets (originating from the US and in English) over a two-week period in August 2009 from 11:00 AM to 5:00 PM (CST) and separated them into six categories:
Social networking researcher Danah Boyd responded to the Pear Analytics survey by arguing that what the Pear researchers labelled "pointless babble" is better characterized as "social grooming" and/or "peripheral awareness" (which she explains as persons "want[ing] to know what the people around them are thinking and doing and feeling, even when co-presence isn’t viable").

An enormous number of universities are using Twitter to brand and profile themselves. I have been Tweeting since 2006. When it comes to my own Twitter use and what I get from it. I do not engage in conversation so much using Twitter, although it is becoming more of my twitter activity as more people join in.  I have broken it down into these categories:

1. Bookmarks - I have a delicious site where I keep bookmarks. Twitter is more about sharing bookmarks than archiving and ordering them. I can also harvest bookmarks from the Twitter feeds I follow.

2. RSS Feed - Twitter has replaced my syndication services, although I keep it going I hardly ever use it. The people I follow using post about their blog entries

3. Profiling myself - this includes notifying on my own blog posts, publications, events, performances, teaching and travel.

4. Conference and event reporting -  I can follow a conference or event either from the Twitter site dedicated to it, or from its assigned hash tag.

5. Note taking and record keeping - i have composed blog posts and journalism articles from my entries on Twitter. It is possible to archive your Twitter posts and as Twitter only keeps the previous 4000 tweets you may want to do this regularly.

6. Networking - Twitter tracks the location of Tweets and you can search of other Twitter users nearby. As well Twitter is an easy way to come into contact with the leaders or interesting people in your academic field.

7. As a Text and Research Object - Enormous amounts of information are generated by Twitter. In regard to some of the big national and international events of the past few years, Twitter has been a source of expression and information for millions of people. The Israeli invasion of Gaza, The student uprising in Iran, the revolutions in Egypt, Libya and Tunisia and the massacre in Norway have all be well documented using Twitter. Collecting this information and collating it is an interesting challenge for academics.

8. Creative Writing and Literature - Fiction using twitter abounds by so-called TwittLitters. As well there is the retelling of the great novels using Twitter, with the book Twitterature selling well in many countries.

9. To converse and socialize - you can chat with friends, discuss a common interest, look for missing people at workshops, get information about food, accommodation, travel, books, music, websites and so on.

Posted by James Barrett at 3:22 PM

Augmented Reality is the blending of digitally generated elements against a real world background to enhance user experience and perception. A video/television sports broadcast is a simple example of AR, with graphics and animation overlayed on a live feed to improve understanding of the game.