The decentered nature of electronic text empowers and invites the reader to take part in the literary process. Poststructuralist theorists predicted a total liberation of textual restrictions imposed by the medium of print. However, while these are culturally significant claims, little attention has been paid to their realization

In the seven years since these words were published little has changed in regards to claims made in regards to "a total liberation of textual restrictions imposed by the medium of print". The so-called social media which is filling the lives of so many people today is based upon an often unstated premise that 'You' are the media. That the limitations of what can be created and published are based on the limits of the imagination and ingenuity of those who sign up for Blogger, Flickr, Facebook, Twitter, Myspace and so on. But if we pause time and stop to consider the mechanics, what could be termed the archiTEXTure, of social media platforms, what do they reveal when they are exposed to close readings as texts?

A close reading is a product of a particular approach to literature that has developed during the past two hundred years, although it has its origins in the humanism on the Renaissance.

"In literary criticism, close reading describes the careful, sustained interpretation of a brief passage of text. Such a reading places great emphasis on the particular over the general, paying close attention to individual words, syntax, and the order in which sentences and ideas unfold as they are read" Wikipedia

Close reading of digital media pays attention to the components of the text and how they relate to each other. It analyzes and attempts to explain how possible meanings are built up according to the choices available in the digital text and what the texts present for reading. When you perform a close reading of a digital text look at the relationships that are present in the text, what values and hierarchies are represented, and the possible choices the texts makes available in responding to it.

The Text
I would like to begin by clarifying what is a text. Looy and Baetens return to the great poststucturalist theorists for gaining perspective of what is a text in the context of the digital,

Going further along this road, "A text is a coherent set of symbols that transmits some kind of informative message" (Wikipedia).

Things to Read For
1.Authorship
Included in the concept of the digital text as social media is an enormous range of variables. They can be grounded in the fact that there is no single author in social media. Even a blog is a product of collaboration, from the design (consider if one downloads a template) to the comments section on each post. Some best blogs on the web are group projects, such as the HUMlab Blog, WFMU Beware of the Blog, and Grand Text Auto. The principle of many-to-many in social media has great implications for authorship. How textual components are transmitted and presented is in terms of "such modes as appropriation, synthesis, recombination, mutation and generation, postmodern poetics expresses a commitment to the dialogical, social world"(Joseph M. Conte, Unending Design: the Form of Postmodern Poetry).Similarly, in the Web-based communications, everyone is a potential author, contributor, and message creator . The concept of a traditional author (or a message creator) is deconstructed and replaced by a collective authorship. The individual as well as an organization cedes control over the communicative process. Attention should be paid to the material configuration of the media, as it is where form is adhered to. In his book, Code and Other Laws of Cyberspace, Lawrence Lessig argues that code displaces the balance in copyright law and doctrines such as fair use (135). If it becomes possible to license every aspect of use (by means of trusted systems created by code), then no aspect of use would have the protection of fair use (136). The importance of this side of the story is generally underestimated and, as the examples will show, very often, code is even (only) considered as an extra tool to fight against "unlimited copying".


2.Space
Digital texts are generally spatial. By this I mean they use the elements of space that are part of the media to transmit informative messages. Let take a look at Grand Text Auto 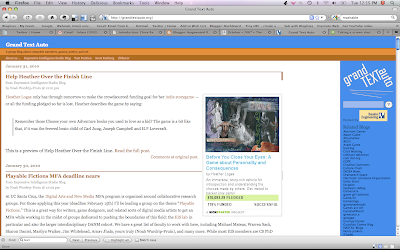 In considering space one should look for contrasts, colors, space between features, the size and possible areas of dominance, how the eye is drawn across the screen, how links are arranged, how time is represented in the page, and functional aspects such as ease of differentiation between permanent and temporal features.

Prezi is a good example of how time is presented in space:

How Prezi forces us to subscribe to its depiction of time is a result of the rules of its code. A hierarchy is created by the two dimensional arrangements of elements in Prezi presentations.

3.Repetition
The repetition of elements in a digital text which suggests responses that can be made to it. Janet H Murray writes it is devices for patterning language into units that make it easier for bards to memorize and recall" that "we in a literate era devalue as repetition, redundancy and cliché," but that make it possible for each performance to be improvised on the spot, so that they are essentially multiform, with "no single canonical version." Repetition of words, images, audio assists in guiding reading of digital texts.

A Reading of Facebook
Facebook is a horizontally arranged network based on association rather than interest (unlike Myspace). One builds connections with others in the viral sense; email is used to bring contacts into the system. By allowing Facebook access to email account (Hotmail, Gmail, Yahoo and AOL) mass mail-outs can be one way of building up you friends list and of course bringing contributing to the Facebook database. The other way of finding contacts is through work, school and college. I myself went to a tiny high school in a small town in rural Australia (Oakey State Highâ€¦go the Bears!) so it is not on the list of schools (you can only choose, not type in). But the town I went to university in is well represented. Interestingly the private schools (as in non-government) seem to be much more represented in the lists of high schools. In Brisbane, the capital of my home state there are 13 High schools listed and only 3 of them are government schools that did not charge fees. I wonder if this reflects the overall demographic of Facebook or the use of digital social software in Queensland, Australia. There is also college and company searches but when you type in the title Facebook will not prompt the line for you as there are no prior entries in the database of the term.

Setting up a profile on Facebook is not too different from other social platforms. There is lots of plug-ins that can be loaded into a page; video, books I’ve read, photos, movies and the list is growing daily. There are issues of readability relevant in regards to a Facebook site. I myself believe minimalism works on the web, this is a design question but I try to keep my site fairly sharp and to the point. I decline lots of offers from friends for zombie clubs, vampire attacks and poking or biting my colleagues. I have decided it is an identity thing I have going on Facebook and not a game. I am also fully aware of what I disclose on Facebook as it is a public space, even if it does have something of a gated community feel to it. I don’t think the gated (restricted access, password protected etc.) is that substantial.

Once you have a profile on Facebook then you can join interest groups. These can be from the sublime to the ridiculous: “I bet I can find 1,000,000 people who dislike George Bush!” was a group I just noticed. I have just applied to be friends with digital researcher Anna Valdes (I have met her, I wonder if she remembers me?) in order to join her group Gender and Computer Games. The gender group is made up of serious academic researchers, game developers and players in Sweden. A worthwhile project I believe. The groups are what led me into the close reader of Facebook, as we need to create a group for our honored guests visiting Umeå for the annual awards ceremony. There are actually 3 stages we have to get through to create a group:

1. Joining Facebook
2. Becoming a friend with one central person who is organizing the group if it is not open.
3. Joining the group
Each of these stages has to be fulfilled if one is to be a member of the group. If it is a closed group only the administrator of the group can invite another;

You can join any open group on your networks. Also, you can join any “global” group that is open. These groups can be found using the Search page. Just type in a keyword for the group you want to find and specify that you are looking for “Groups.” Alternatively, you can browse by category from the Groups page. When you find the group you are looking for, click on the “join group” link on the right side of the screen. Some groups require administrative approval for you to join. If you try to join these groups, you will have to wait for an admin to let you in. Finally, there are some groups on Facebook that are invitation only. You cannot request to join these. Only an invitation from a group admin will give you access

So sometimes you have to make each member a friend before you can invite them to the group (tedious). If you send an invite to become a friend to someone who is not a member of Facebook they are asked in the same mail to join Facebook and become members of the group once they accept the invitation that appears in the Facebook Inbox.

All these considerations add up to becoming the texture of Facebook. The texture is the layers of text that have to be negotiated to engage with the site. Texture combines the collaborative aspects of Facebook (millions of authors creating content) with the structures and laws that come from those that created the Facebook platform. In essence with the efforts to create the annual awards group, I have been navigating the texture of Facebook in something akin to what Jerome McGann described in Radiant Textuality: Literature After the World Wide Web (2001) as a ‘Deformance’, the moving from non-normative readings of Facebook (I have no idea what I am doing and I make ‘mistakes’) to normative readings, where the texture becomes familiar and I create the group site that is suitable for the annual awards ceremony.

I would like you to perform a close reading of a social media text. What you are actually paying attention to in critiquing the possible meanings of these texts is interaction design.

"Interaction design (IxD) is the study of devices with which a user can interact, in particular computer users. The practice typically centers around "embedding information technology into the ambient social complexities of the physical world."[1] It can also apply to other types of non-electronic products and services, and even organizations. Interaction design defines the behavior (the "interaction") of an artifact or system in response to its users. Malcolm McCullough has written, "As a consequence of pervasive computing, interaction design is poised to become one of the main liberal arts of the twenty-first century" Wikipedia

You can find some subject texts here:

As well as the usual social media sites you have been working with (i.e. Facebook, Twitter, MySpace etc.)
Posted by James Barrett at 2:20 AM