The Folk of Digital Primitive 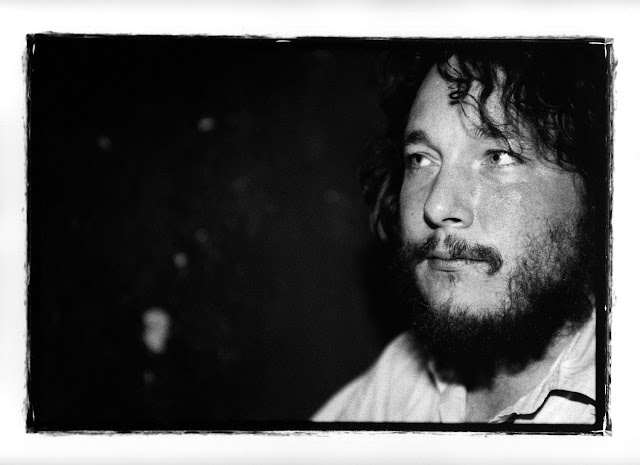 A lecture in the Sonic Lecture Series at the Centrum Gallery for Contemporary Culture in Berlin. 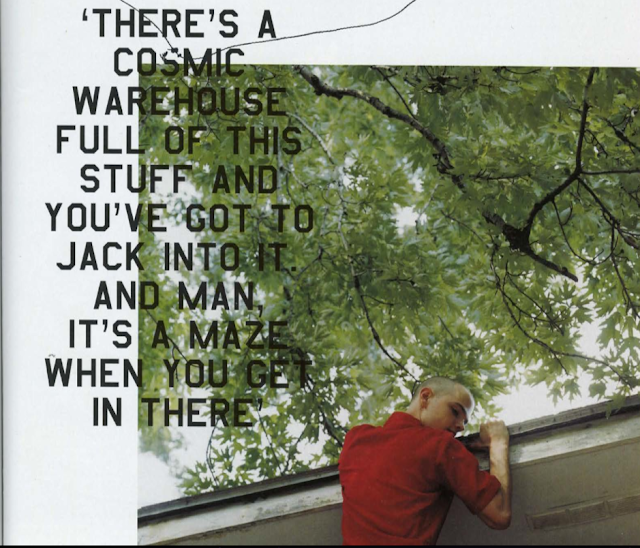 I would like to begin by saying this presentation is not so much an attempt to define a genre of music as a somewhat personal account of an underground global network of music-makers that seem to have some things in common. Many of them know each other. The sounds they make are harder to group together. I do quote and come up with some common threads that seems to hold it all together as a genre, but there are performers within the scene who defy these as well. That is why this music is so interesting. This is a music sometimes erroneously termed 'New Weird America', erroneous mainly due to its global nature:

As far as the tools are concerned began when between 1998-2003 major advancements were made in CD-R writing software. By 2004 it had become possible to buy a CD-R Read/Write drive for a home PC at a fairly low price. Home printers even in colour were affordable as well. The home tape culture of the 80s and 90s was thus transposed into a digital context by musicians who did not want to be famous but wanted to share and explore the sounds around them. These musicians had shared influences and substances, cultures art and ideas. Thus was born the basic arrangement for publishing your own music. This combined with the Internet opened the first stages in the freak folk global collective.


"Self publishing has always enabled challenging works of art to interact with the world while they're at their most potent. It is also a measure of artistic seriousness. And just as small press journals provided a platform for otherwise unpublishable work from the 60s and 70s, so today the increasing affordability and accessibility of home publishing and CD burning, along with the global-spanning reach of the Internet, have conspired to energise a new generation of fringe operators." - David Keenan 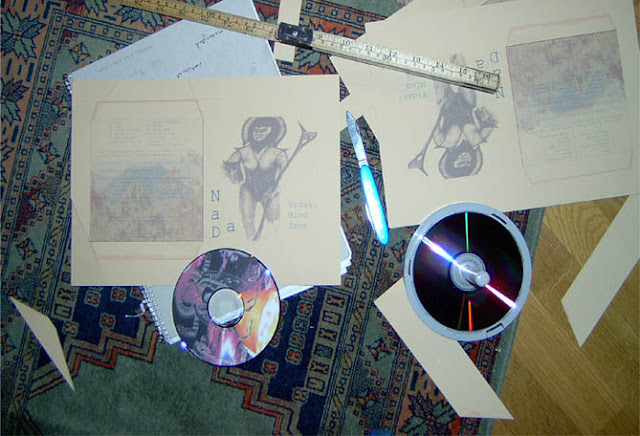 Burning and printing technology in action, 2005 for the Music Your Mind Will Love You release 'Yidaki Mind Tree'

The Internet and cheap home music publishing technology in the last decade has produced a global network of music made by low-fi, domestic, DIY groups and released mostly on CD-Rs by tiny music labels. Perhaps it can be said to have officially started when in August 2003 The Wire magazine published a cover story entitled "Welcome to the New Weird America: Sunburned Hand of the Man and the free folk explosion" by David Keenan:

"This is improvised music that impacts on the ass as much as the third eye, that draws from mountain music, Country blues, HipHop, militant funk and psychedelia as much as free jazz".

"Mostly based outside of the major US cities, disparate, culturally disenfranchised cells have begun to telegraph between each other, forming alliances via limited handmade releases and a vast subterranean network of samizdat publications, musicians - and fun-run labels and distributors"

The present day bone and electricity groups follow in the footsteps of such luminaries as John Fahey, Sun City Girls, Can, Faust, Albert Ayler, Henry Flynt, Pauline Oliveros, The Incredible String Band, The Flower Travelling Band, Os Mutantes, the rediscovered Vashti Bunyan (who re-emerged with her one solo album from 1970 in the 21st century to become a inspiration for the new fold) and the seminal Tower Recordings.

"Everyone on the bill is into freedom on a social level, on a spiritual level and - especially - on a musical level". Matthew Valentine, of Tower Recordings on the 2003 Brattleboro Free Folk Festival.


Described by one label as "modern improvised outsider music" (We Have No Zen) the genre can be defined by it being:

Global - fake-ethno, Indian, African and Arab musical structures mixed with traditional folk music, blues, progressive patterns, joined by the World Wide Web with tours organized by email and MySpace not by agents or management, artists often based in small towns or rural collectives (not urban),

Hybrid: digital sampling combined with home made or instruments from the furtherest reaches of the globe.

Spiritual: Connection to and veneration of nature. trance inducing music (drones, repetitive rhythms, chanting and rounds), described by some as a "potential catalyst for social change," with an attention to the "roar of the cosmos" (Keenan), and the "organic" (John Molony from Sunburned). Lyrics that pay attention to inner states, with holistic and non-rational imagery often drawn from themes association with nature. Ritualistic performances, often where a single element such as a central drummer, directs the progression of the music and action. Attention to set and setting for music.

Crafted: The performances are improvised and individual and cannot be repeated, the recordings are often marketed in limited editions and are described as being 'handmade' and numbered , with artwork added to CDs and instruments that are made, modified and re-tuned, DIY everything from tours to growing your own food.

"More than color and forms, it is sounds and their arrangements that fashion societies. With noise it is born disorder and its opposite: the world. With music is born power and its opposite: subversion. In noise can we read the codes of life, the relations among men. Clamor, Melody, Dissonance, Harmony: when it is fashioned by man with specific tools, when it invades man's time, when it becomes sound, noise is the source of purpose and power, of the dream - Music." - Jacques Attali, Noise: The Political Economy of Music p6

Sunburned Hand of the Man

Brothers of the Occult Sisterhood

Lamp of the Universe

Keijo and The Free Players

Spires that in the Sunset Rise

Wooden Wand and the Vanishing Voice

Music Your Mind Will Love You,


This is a sonic collective between the intersecting Internet communities of these bands, the sounds they make and the creative arts model they represent. This is not an urban avant-garde but a diffuse collection of people who came of age in a world were boarders were changing and sounds were free. Many live outside the major centres (New Zealand and Finland being two centres of the genre) and communicate and publicise their work via the Net. First will CD-Rs, touring, mail order and creative exchanging then later with dowloading, uploading, forums and streamed media. These networked technologies have created a global network of digital primitives who play the sort of folk music that is dependent upon the digital and the Internet, freedom, openness and curiosity. A global blog network exists where information and downloads are posted.

We Have No Zen

WFMU Beware of the Blog

During 20011-12 the Mp3 blog scene has taken a beating with servers closed and writs given. Many of the blogs that fuelled the heights of the freak folk wave have passed on. These days file sharing sites have taken on some of the space from the departure of the Mp3 blogs. Once should perhaps acknowledge at this stage the great SoulSeek community of file sharing that set the flame to the wick of a global community in 2006.

"That's what I think the free folk ethos is, people who have stuck to their laurels, producing the most completely independent music, free of the confines of popularity, scenes or movements, and concentrating on focusing on their own art and voice and dedicating themselves to that".  - Matthew Valentine, 2003 Brattleboro Free Folk Festival.

In its present state the free freak folk scene has uploaded itself in response to the ease of streaming music online. The CD-R may have opened the door but the sound is now in the aether and all around us. Sites such as the Free Music Archive and Soundcloud are now providing the means of presentation, publication and archiving for outsider musicians who draw inspiration for folk and ethno, punk and prog trance.  Download sites like the recent New Weird Australia provide free albums. These sites join Archive.org, MySpace and Facebook as online repositories for the sounds of now. the other great festival for the community is Terrastock;

"Terrastock is not just a festival, it’s a family. There’s a feeling of community that you won’t get anywhere else and you can’t help but feel caught up in it all. This isn’t Boneroo, Lollapalooza, or Austin City Limits. People aren’t here for spectacle or to be seen – they are here for the music and the community that surrounds the psych genre whose umbrella is the zine Ptolemaic Terrascope. That sense of community extends from the biggest acts to the smallest" Terrastock 7.

"All music, any organization of sounds is then a tool for the creation or consolidation of a community, a totality. It is what links a power centre to its subjects, and thus more generally, it is an attribute of power in all of its forms" Jacques Attali, Noise: The Political Economy of Music p6.

'Music Your Mind Will Love You' Catalogue

"Is this folk music? Maybe so. When it comes down to it, folk is any music sung and played because people want to play it. Folk music is heart and soul, not brain and pocketbook, whether performed solo by a Senegalese kora player, or a group wielding digital samplers, toy pianos, and electric sitars". Folk Music's New Genre Benders, UtNE 2004

In my experience  of this culture the people involved in it are not New Age, not really hippies, not drug fuelled travellers. These are often quite angry people who are conscious of the state of the world today, who see a global society emerging, and feel they have something to contribute with sound, but do not want to play the fame game. They are craft folk, who make their music for each other, who see it as a way of life rather than a way to pay the bills. Some actively ignore fame. Many are well educated and channel that into their performance. Community is very important in this culture. The state of song is perhaps more so.
Posted by James Barrett at 3:13 PM