Presentation Formats and Techniques on the Internet

My Online Profile on Prezi
Digital Rhetoric
Rhetoric with so-called "born-digital" texts demands skills and forms of expression that are radically different from works that are digitized or that employ remediated authoring methods.


"According to their book Remediation: Understanding New Media by J. David Bolter and Richard A. Grusin, remediation is a defining characteristic of new digital media because digital media is constantly remediating its predecessors (television, radio, print journalism and other forms of old media). Remediation can be complete or visible. A film based on a book is remediating the printed story. The film may not provide any reference to the original medium or acknowledgement that it is an adaptation. By attempting to absorb the old medium entirely, the new medium presents itself without any connection to its original source. On the other hand, a medium such as a movie clip can torn out of context and inserted into a new medium such as music. Bolter and Grusin describe this as visible remediation because, "The work becomes a mosaic in which we are simultaneously aware of the individual pieces' and their new, inappropriate setting."(New New Media Wiki)

The born-digital work "refers to materials that originate in a digital form. This is in contrast to digital reformatting, through which analog materials become digital. It is most often used in relation to digital libraries and the issues that go along with said organizations, such as digital preservation and intellectual property. However, as technologies have advanced and spread, the concept of being born-digital has also been discussed in relation to personal consumer-based sectors, with the rise of e-books and evolving digital music. Other terms that might be encountered as synonymous include “natively digital,” “digital-first,” and “digital-exclusive'" (Wikipedia).

Authoring the born-digital text demands a skill set the includes those needed for the analogue texts. So how should one think about rhetoric in relation to born-digital texts? Of course it is simpler to break it down into the reading practices that can be associated with the media. The visual includes moving and still images, along with 3D navigable spaces and all the dynamics that can be coded into written text using digital media. One has to only consider the speed and movement of Young-Hae Chang Heavy Industries to see how words become images in a born-digital work:


The visuals in a Young-Hae Chang Heavy Industries are entirely made up of the written word, but amount to more than that in reception. With rhythm, dimensions and addressive syntax, an experience is created for the reader that is very different from reading written words on a page. The role of audio in this experience cannot be understated.

Sound is an important consideration in any born-digital work. Sound creates space, contextualizes objects, provides rhythm for the text and guides the reader along a set path of interpretation. Ignoring sound in the authoring process is to present a digital work without its legs.

The creation of space is achieved with the visual and the audile, but relies on the interrelated quality of perspective. Perspective is a vast field of knowledge. Sufficient to say the era of the marriage between realism and quattrocento perspective in the Western Hemisphere is coming to an end.

Natural perspective is gradually being coded by digital media in the current age. Rhetoric is the body of knowledge that forms this coding.


In many presentations you will combine synchronous with asynchronous, as the results of your live presentation in person; slides, notes or a recording (audio/visual) will be distributed online. Intellectual property should be considered in all presentations, but if the presentation is to be stored online, it is vital. How do you want recordings of your presentation, or anything you present in digital form to be distributed? there are many ways; blog, YouTube, Slideshare, Twitter, podcast, Scribd to name but a few channels.

- Combine your physical presence with the dynamism and velocity of the materials you present.


Digital media relies on feedback and how it captures change using digital programming, and responding to inputs from users, either as physical interaction or coded commands. When using digital media for presentations you should consider yourself, your body and cognitive assets part of the programming environment. Share the space with the media. Act in it and present the material according to how you want it to change and develop.

- Control and lack of control in the presentation should be considered consciously.


The famous example of a certain well known social media researcher who spoke at a large and prestigious gathering with a Twitter feed behind her. The presenter was unaware that unkind things were being posted on the Twitter feed as she spoke. Laughter and a distracted audience followed:

"The Twitter stream was initially upset that I was talking too fast. My first response to this was: OMG, seriously? That was it? Cuz that’s not how I read the situation on stage. So rather than getting through to me that I should slow down, I was hearing the audience as saying that I sucked. And responding the exact opposite way the audience wanted me to. This pushed the audience to actually start critiquing me in the way that I was imagining it was."

- Context is important and you should always be aware of it.


First and foremost context is determined by; "Who is the audience?" In good digital presentations the audience will be with the presenter in the space (as a result of perspective and temporal representation).  Digital presentations, even in the archive, are more like a discussion (think of comments on a blog) and you have to be speaking the same language in order for a conversation take place. This is related to the issue of control, the personification of the Twitter stream mentioned above being a specific example. Context can be divided into fixed elements (e.g. the building or location of the presentation does not change during the presentation) and non-fixed (e.g. speaking for two hours to a group of 18 year old people on the subject of the Franco-Prussian War of 1871 will produced changes in the waking states of the audience as a presentation context).

- Consider the space the presentation creates.


A space is created when one makes a digital presentation . If it works well the space is occupied by the audience, the presenter and what is presented. Digital media has the potential to engulf people and provide a scene for actors and actions in a narrative. 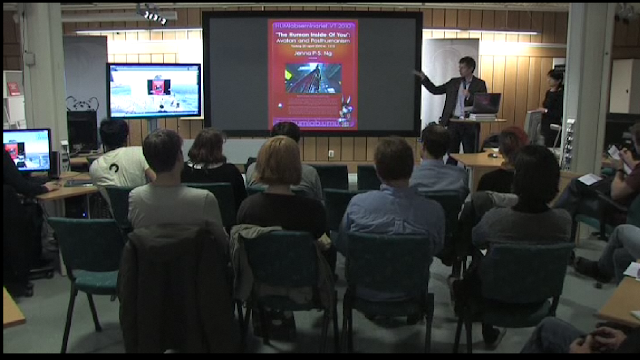 This digital presentation is taking place in three locations: inside Second Life, over a live video stream and in the physical space of HUMlab. It exists today as an archived stream.

Sharing is central to digitally mediated presentations. We share online all the time; publishing on blogs, uploading documents to Scribd, a video to YouTube, photos to Flickr or Facebook. Audio can be shared on SoundCloud, AudioBoo or Ourmedia, Libsyn, Globat & Powweb. If you are presenting in a professional context you must obey copyright law. Open Source and Creative Commons are two important tools for stock content to use in your presentations. Creative Commons licenses provide a flexible range of protections and freedoms for authors, artists, and educators. Open Source content allows presenters to use music, images and films, along with editing software without the need of licensing.

Posted by James Barrett at 8:54 AM

I am researching an educational book on branding, and we would liek to use an image from this blog post.

I would really appreciate it fo you could email me at nickwheldon (at) yahoo (dot) com.