An Introduction to Digital Literature

What is Digital Literature?

The term refers to works with important literary aspects that take advantage of the capabilities and contexts provided by the stand-alone or networked computer. Within the broad category of digital literature are several forms and threads of practice, some of which are:

To begin with, it is necessary to define what we mean by ‘digital literature’. We can distinguish at least three quite different meanings for this expression:
1. Digital Publishing. This perspective focuses on the production and marketing of literature and books, with the aid of digital technology. It includes such phenomena as eBooks, Print On Demand, AudioBooks as MP3 files etc. Content-wise it is a question of literature in a traditional sense.
2. Scholarly literary hypertext editions for educational and research purposes. This category includes hypertextually annotated literary works, as well as multimedia implementations of classics. Mainly, because of rights issues, these are older works, free of royalties.
3. Writing for Digital Media. Digital texts are always programmed text, on one level they are computer code. This opens up a limitless field of literary play and experimentation, as texts can be programmed to behave in a more or less dynamic way. We call this perspective cybertextuality and the works cybertexts, following Espen Aarseth (1997). Cybertextuality is an umbrella term for different types of digital texts, such as hypertexts, kinetic texts, generated texts, texts employing agent technologies etc.
All three categories are important for literary studies, and they also bear implications for literary pedagogy.
Raine Koskimaa, Teaching Digital Literature: Code and Culture

Medieval Help Desk
The Scriptorium was in turmoil. Brother Paul, the precentor in charge, had detected a murmur from the back row and, furious that the rule of silence was being compromised, strode down the aisle just in time to see Brother Jacob tuck something under his robe. When he demanded to see it, Brother Jacob shamefacedly produced a codex, but not one that the antiquarii of this monastery had copied — or of any monastery, for this Psalter was printed. Shocked as much by the sight of the mechanical type as Brother Jacob's transgression, Brother Paul so far forgot himself that he too broke the silence, thundering that if books could be produced by fast, cheap and mechanical means, their value as precious artifacts would be compromised. Moreover, if any Thomas, Richard or Harold could find his way into print, would not writing itself be compromised and become commonplace scribbling? And how would the spread of cheap printed materials affect the culture of the Word, bringing scribbling into every hut and hovel whose occupants had hitherto relied on priests to interpret writing for them? The questions hung in the air; none dared imagine what answers the passing of time would bring.

Electronic literature, generally considered to exclude print literature that has been digitized, is by contrast "digital born," a first-generation digital object created on a computer and (usually) meant to be read on a computer. The Electronic Literature Organization, whose mission is to "promote the writing, publishing, and reading of literature in electronic media," convened a committee headed by Noah Wardrip-Fruin, himself a creator and critic of electronic literature, to come up with a definition appropriate to this new field. The committee's choice was framed to include both work performed in digital media and work created on a computer but published in print (as, for example, was Brian Kim Stefans's computer-generated poem "Stops and Rebels"). The committee's formulation: "work with an important literary aspect that takes advantage of the capabilities and contexts provided by the stand-alone or networked computer."
Hayles, N. Katherine, ”Electronic Literature: What is it?”

Konkret poesi
At the intersection between games, puzzles, poetry and prose is concrete poetry:
Concrete poetry, pattern poetry or shape poetry is poetry in which the typographical arrangement of words is as important in conveying the intended effect as the conventional elements of the poem, such as meaning of words, rhythm, rhyme and so on. It is sometimes referred to as visual poetry; a term that has evolved to have distinct meaning of its own, because the words themselves form a picture. This can be called imagery because you use your senses to figure out what the words mean. Concrete poetry has a long history. Poems that Go is an online periodical that publishes kinetic digital concrete poetry. 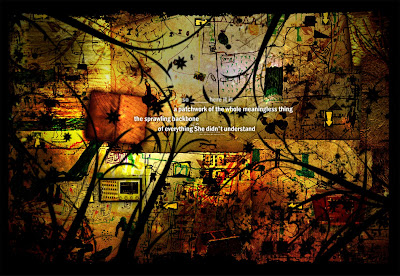 Worth Considering in the Reading of Digital Literature
Space
A defining characteristic of digital literary works is how space is utilized within them to aid in the conveyance of meaning. I believe space is the raw material of design and within its frame it is the grounding of the places that feature in the work. Space is used in a number of ways in works of digital literature;
* As a means to convey rhythm and a sense of timing,
* To regulate and direct the choices that can be made in navigating to the work,
* To create pauses and gaps in the work for reader reflection
* To arrange the features of the work in the sense of design, including the creation or representation of place,

Reading Paths
The reading paths of a digital literary work can take various forms, the tree and the labyrinth are the most common. 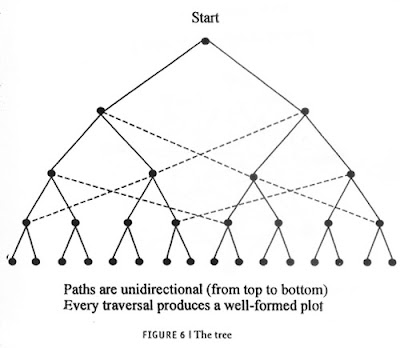 Layers
The ways the sections or segments of a digital literary work combine can be thought of in terms of layering in order to understand how they function within the structures of narrative media. Layering is present in the combinations of audio, image and text when moving through a three dimensional space that tells a story.

Dreamaphage by Jason Nelson (2004) shows how layering in a work of digital literature is used to organize the reading experience. Order is established in space by the layering of the components.

Speed
The feedback system of a digital literary work is important for how the story can be realized. How information is entered into the digital work of literature and what results it returns drives much of the narrative structure of the work. Katherine Hayles has written:

"Complex feedback loops connect humans and machines, old technologies and new, language and code, analog processes and digital fragmentations. Although these feedback lops evolve over time and thus have a historical trajectory that arcs from one point to another, it is important not to make the mistake of privileging any one point as the primary locus of attention, which can easily result in flattening complex interactions back into linear casual chains." My Mother Was a Computer

When we read digital literature it is not only words we read. The images, spaces, sounds and representations of media (radio, film, newspapers, TV, architectures) in a digital work are interepreted and responded to by us. How fast each of these systems returns a result to us establishes much of how the digital work is read. The speed of the publishing system, the resolution of images, the size of audio files in a work provide a unifying thread in the work that does not privilege one site in the system. Rather how the speed of the work directs reading ties the diverse media forms together.

Facade
An "interactive one-act drama" that is installed on each of the computers in HUMlab. Please experiment with it.

Alleph
A complex work that involves seven visual spaces with three links in each. Telling a story of migration and self identity.

Last Meal Requested
An artistic recounting of the cruelty of people and the struggles of minorities and the disempowered. By Japanese/Swedish artist Sachiko Hayashi

Fast City
A multimedia representation of Singapore in poetic form. By Don Bosco. You need to download and install it.
Posted by James Barrett at 11:52 AM

It's my pleasure to see your post here the idea you share is more useful for me. Thanks