Isfahan from Cristóbal Vila on Vimeo.
Esfahan by Cristobal Vila, (2005)

In a recent newspaper article it was stated:

"Until recently the Vatican was secretive and their way of controlling the message of the Church was to release information slowly and highly selectively through carefully worded documents," said Francis X Rocca, Vatican correspondent for Religion News Service.

"The problem now is that the internet and the blogosphere won't wait for the Vatican, so its message gets swamped."

The relationship between the Catholic Church and technology, particularly technologies of representation, is an old source of conflict. The reformation and the role of Martin Luther (1483-1546) is defined by technology (the printing press) and religion.

How technologies of representation are used in the contexts of religion has a lot to do with how people participate in religion, how they communicate with each other, what are the rules for what can be shown and not shown. With the widespread use of digital media that is now spreading around the globe, the way people relate to and practice religion is changing.

Technologies of representation are not just instruments of recording and reporting. Their basic attributes determine what it is actually possible to conceptualise, capture and articulate. Photography, to take a classic example, transformed people’s outlook on the world because it could provide an unrivalled visual framing of actuality. It had no equivalent in the prior traditions of visual communication. Technological invention spurs social change.Hypermedia History: Changing Technologies of Representation for Recording and Portraying the Past

Religion in Second Life
Second Life is a three dimensional online social world where people, represented as avatars, meet, chat, buy and sell things, educate themselves, or even go to church. 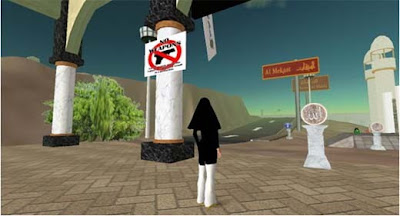 The entrance to the Mecca sim in Second Life 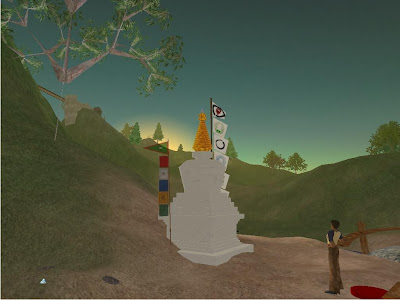 Tangle.com
Tangle.com (formerly GodTube) is a global technology company that creates social networking tools for the faith-based and family-friendly market, and allows members to connect and share their faith and lives through videos, photos, blogs, music and more. Originally launched as GodTube.com, a video sharing site, it set the record as the fastest growing Web site in the U.S. during its first month of operation. The site grew rapidly and attracted up to 2.7 million users a month. tangle.com has expanded to become the go-to Web site for the family-friendly community to safely interact online through a full social network.

Left Behind: Eternal Forces - video powered by Metacafe
Left Behind: Eternal Forces (2006) is a real-time strategy game for Microsoft Windows by Left Behind Games.
The player joins a Christian organization (known as the Tribulation Force) who are fighting the forces of the Antichrist (known as the Global Community Peacekeepers, loosely modeled on the United Nations Peacekeepers). The game is based on the evangelical Christian Left Behind series of books.
The player is able to direct the actions of the main characters (Rayford Steele, Cameron "Buck" Williams, Chloe Steele, and Bruce Barnes) in their efforts to counter Antichrist Nicolae Carpathia. The game was released in the United States on November 14, 2006, and received a somewhat mixed if not negative reception from critics.

"The Christian Crew Council are members who guide and lead our community in all things pertaining to the faith, function, and fellowship of our Crew. Council Members come to us from all age groups, and from all over the world, but are resilient and solid in their agreement that The Christian Crew is an important ministry tool, to be used to its utmost to further the Gospel of Jesus Christ. Council Members use game servers, websites, voice chat, and many other resources to aid all members of our Crew to become stronger in Christ, and closer to all of their brothers and sisters in Christ.
Council Membership is a volunteer position. Each position carries with it not only the duties of following sound Biblical Doctrine in making decisions, but each position also carries duties and responsibilities which pertain to different areas of our community's functions. These range from the technical to the spiritual, but all are important parts in the Body of Christ."

If you are interested in following up any of the things mentioned in this short presentation please speak to me. As well if you are interested in working in HUMlab you can register for an account on out website. HUMlab is open 24 hours a day seven days a week and offers students and staff at Umeå University a world class environment for research and teaching in the digital humanities.
Posted by James Barrett at 5:21 AM