Mashup: Deformative Practice as Comment on Gender and Sexuality

Let’s talk terms. ‘Remix’ and ‘Mashup’ . What is the difference. According to the great wiki:


A remix is an alternative version of a song, different from the original version. A remixer uses audio mixing to compose an alternate master of a song, adding or subtracting elements, or simply changing the equalization, dynamics, pitch, tempo, playing time, or almost any other aspect of the various musical components. Usually, a remix will involve substantial changes to the arrangement of a recorded work; lyrics may be added or removed, such alterations are not a necessity. A song may be remixed to give a song that wasn't popular a second chance at radio and club play, or to alter a song to suit a specific music genre or radio format.

Mashup (or mash it up) is a Jamaican Creole term meaning to destroy. In the context of reggae or ska music, it can take on a positive connotation and mean an exceptional performance or event. The term has also been used in hip-hop, especially in cities such as New York that have a high Jamaican population.

Mashup, or bootleg, is a musical genre which, in its purest form, consists of the combination (usually by digital means) of the music from one song with the a cappella from another. Typically, the music and vocals belong to completely different genres. At their best, bastard pop songs strive for musical epiphanies that add up to considerably more than the sum of their parts.

Differences? Remix has cool white connotations of high tech interventions. Mashup is Creole (read black), with a hot edge of violence (to destroy) and also termed ‘bastard pop’. Remix is attributable to ‘a remixer’, whereby the artist as genius lives on within the new technology. Mashup is a process (as is Remix actually) that confuses boundaries while striving for a constellation that is only “considerably more than the sum of their parts” but never a new thing. But remix creates a song with “substantial changes” and “a second [coming??] chance”. Remix exists in the production of commodity culture while mashups subvert the values of that culture. Originality is supposed in the remix while it is erased in the mashup.

Consider the points raised in this seminar outline (PDF) in regards to mashup culture. Who owns words, and what is the value of fan production? Can you see value in mashups if we think about it in the following ways: 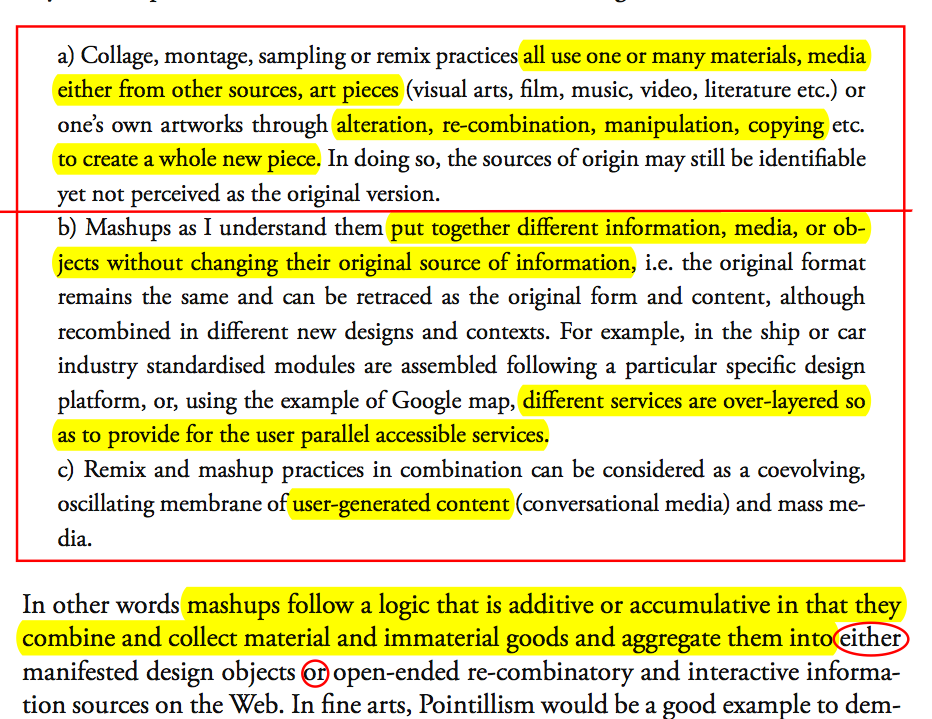 
Mashups are combinations of one or more existing works of media that rely on references back to the original/s in order for the newer combinations to be meaningful. In this way mashups differ from remixes as the latter creates a new work and can be made from a single already-existing work. As a critical device a mashup works from what literary theorist Jerome McGann calls derformance.

"Imaginative work has an elective affinity with performance: it is organized as rhetoric andpoiesis rather than as exposition and information-transmission. Because this is so, it always liesopen to deformative moves. Harold Bloom's trenchant theory of poetic influence spelled outsome of the imagination's performative "ratios," as he called them. Certain of these ratios areaggressively deformative, as when Blake famously overturns both Milton's Paradise Lost and itschief precursor, the Judaeo-Christian bible, or when Ronald Johnson selects from and revisesParadise Lost in RADI OS (1977)" (McGann and Samuels)

"Deformative scholarship is all but forbidden, thethought of it either irresponsible or damaging to critical seriousness. It exists nonetheless, and incertain cases it has gained justifiable distinction and importance. Forgery is the most importanttype of deformative scholarship, nor should its contribution to the advancement of learning beunderestimated, as Anthony Grafton has recently shown." - (McGann and Samuels)

Buffy versus Edward is a well know mashup that exposes many of the biases and stereotypical gender assumptions that underpin the Twilight series, along with foregrounding the strong female character in the Buffy the Vampire Slayer series. This mashup is an excellent critical reflection in the deformative sense that McGann refers to.

"Five months in the making, Buffy vs Edward is essentially an answer to the question “What Would Buffy Do?” My re-imagined story was specifically constructed as a response to Edward, and what his behavior represents in our larger social context for both men and women. More than just a showdown between The Slayer and the Sparkly Vampire, it’s also a humorous visualization of the metaphorical battle between two opposing visions of gender roles in the 21ist century" - What Would Buffy Do? Notes on Dusting Edward Cullen by Jonathan McIntosh (on WIMINs Voices).

One of the primary strengths of digital media as a meaning making system is how the collision of two elements can make a third. A video and a soundtrack can be joined in a webpage to create a new set of meanings when compared to the previous two or more works. 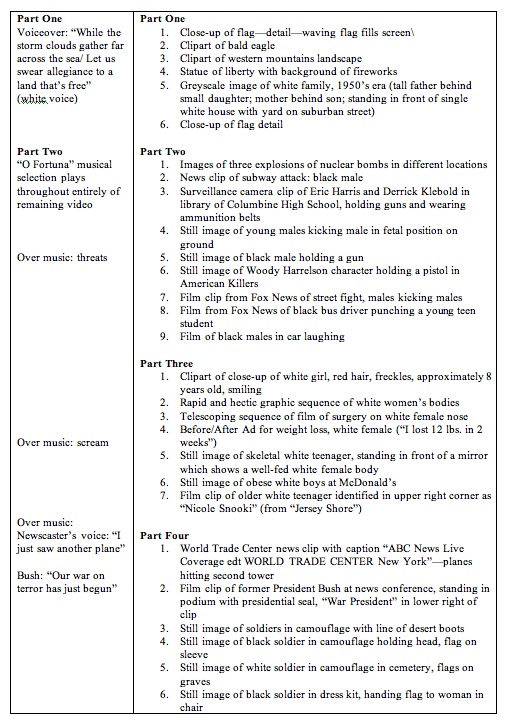 (Note: Some of these references are incorrect, but the general idea is present)

1. Moving visual imagery derived from YouTube, with one of two direct references to 131 course material, i.e., a clip from Michael Moore’s documentary, “Bowling for Columbine”;

3. Spoken verbal commentary in the forms of voice over (inserted from YouTube) of the introduction to “God Bless America” by Irving Berlin, newscaster narration, clips from news conferences of former President Bush and current Vice President Biden, and, in one of two direct references to 131 course material, a clip from Morgan Spurlock’s TV documentary, “Minimum Wage”;

4. Written verbal content in the forms of title (her only self-created addition to the video text), news channel logos (ABC; Fox News; CNN), news captions and scrolling banners, signs in the hands of individuals in visuals or propped on objects in visual); a combination of complete sentences in the narration, voiceover, and signs; and one-line clauses and phrases in the news banners and captions;

(Source: Mashup of Discourses: A Critical Analysis of the Videotext, "Dream America Movie" by Nancy Fox)

What unites all of these elements in the above video is the critical theme of 'What is America today as a contrast to the American Dream?'. The focus provided by a theme is an important thing to remember when making a mashup.

The creation of a mashup can critique an established code or order that represents gender or sexuality.

This video was created by Michelle Redman and Kyle Nimmo for MACS 221 at UFV. It is meant to highlight how gender stereotypes are present in commercials and advertisments.

a) Writing for a Mashup
Creating a mashup is a lot about improvisation, using the materials at hand and understanding how references work in popular culture. You may decide to make a mashup based on a video you have seen that you believe needs to be answered. The YouTube function of Video Response caters for this aspect of the mashup. You may have thought of a theme, say Barack Obama is a Player, and you construct a mashup around that idea, gathering material from videos, podcasts, news images and broadcasts and audiobooks. The time line and rhythm of the segments you use in the mashup are important. Adding music can often make the mashup more effective, or it can fail.

b) The Tools:
There are three approaches to gathering moving images for the construction of a mashup; 1. copying, 2. ripping, 3. making.

1. Copying - screen capture using Camtasia, Jing (Mac and PC), AviScreen Classic, Fraps, GameCam, and Capture Me (Mac compatible). Using these programs you can capture images and often sound (AviScreen is image only). These can be saved as an .avi file and edited in a video editing program. I will return to video editing in the third section, making.

When making mashups a Creative Commons License (CC) is your friend. The CC License allows you to copy and modify content for non-commercial use. There are many sites on the Internet that allow for free use (free as in open). These include the enormous archive.org, OurMedia, and Freesound.org. Soundcloud is a music sharing site that allows for free downloads, as does the Free Music Archive.

3. Making is the stage after both copying and ripping. You have the gathered the raw materials for your mashup and now you need to put them all together. This is the hardest part of the process in many ways. For video editing there are a number of options available. In HUMlab we offer FinalCut Pro. As a free online download, but much simpler solution for video editing I use VirtualDub. There is also Windows Movie Maker. Camtasia (Free 30-day trial version) has a fairly advanced editing function as well. To covert AVI to MOV files for Window Movie Maker, there is a free solution. To covert Flash to MOV try this one. For working with sound, I use Cubase LE4, but there are free solutions. Audacity is one of them. Sill images can be inserted into the editing time-line of Camtasia and FinalCut. You can import the ripped video (after conversion if necessary) into each of the video editing programs mentioned here, using the Import Media function. You may want to add your own content as well and this can be done with the video cameras in HUMlab, the audio software I have mentioned here or using your own images.

Once you have completed your mashup I recommend sharing it with the world, using:

GET TO IT PEOPLE!

Posted by James Barrett at 1:19 PM