The Art and Practice of Machinima: Filmmaking with Graphics Rendering Engines Part 2

Welcome to a short course of how to make machinima. This is the second part of the lecture that takes up from where my colleague Jenna left off in her introduction. I would like to start by recommending 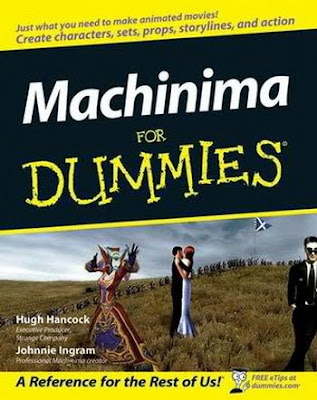 Machinima for Dummies comes with a CD-ROM containing the Moviestorm program for making machinima. The thing about buying a program to make machinima, such as Moviestorm or The Movies, is that you are confined to the program for the look, feel and audio of any movies you make. For this reason you should consider that the making of machinima is a process and each stage in the process is very important for what I describe as the texture of the film. I want to now go through the stages of producing a machinima film and explain what I think is important to know and what one should consider during the production process.

The film which Jenna showed, The French Democracy (2006) was made using Lionhead Studios The Movies. As a result you have backgrounds of jungle and log cabins as settings. It is important to remember that metaphor plays an important role in machinima.

Order of Production
Most machinima films that rely on narrative start with a spoken script. This is then recorded and the action is added later. It is also possible to add audio live using in-world voice software. Sound effects and incidental audio can be added later in post-production. The filming of machinima scenes can be very time consuming. Framing shots, getting avatars to do what you want, cutting out thought bubbles, and getting movements right can take many shots. You just have to go through it. Plan shots before hand taking into consideration the space, its features, if it is a high traffic area (you will have other avatars in shot) and so on.

Post-production is very similar to standard film production. You can do some editing in Camtasia but if you wish to make a more professional film, something like Final Cut or Premier.

Tools
Game Engine
The game engine is the virtual space in which you choose to set you film. There are thousands to choose from. Choose your engine based on criteria such as

Camera Avatars
In most games the camera view is either attached to an avatar or moves in a third person (God-eye) perspective. One must think about the possibilities offered by the visual perspectives in the game engine.

Point of View
There are three main POVs in most game engines:

Second and Third person perspectives offer an independent camera view that is not attached to a single avatar. In the use of first person perspectives it is often worth using multiple camera avatars, who do not appear in the film but are used as virtual cameras in-world.


How to create a virtual camera in the Halo game engine.

To use game platforms such as the Xbox 360 or Playstation you need to set up a video capture through another screen:


When you﻿ capture the video, there should be an options menu where you can adjust various aspects of the capture, such as quality, aspect ratio, etc

Audio
There are several ways of adding audio to your machinima film. You can use a free audio program such as Audacity. More advanced audio software such as Cubase and Protools are great but perhaps are too complicated and result in overkill for beginners. For these three programs the principle is the same; you lay audio tracks in layers, and can splice and edit them, adding effects in a visual time-line set up.

Characters
Avatars make up the graphic characters in a machinima film. Avatars are visual embodiments of users in virtual worlds. You can craft and customize avatars using skins and modeling. As well accessories can be added to avatars, such as hair, eyes, weapons, clothes. 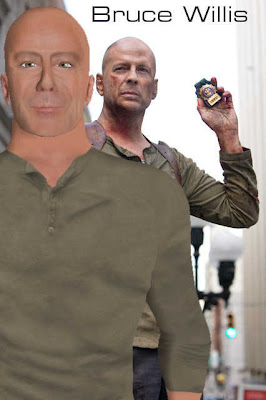 Working on an avatar in pre-production can make all the difference in a machinima film. Skins can be purchased or made, using Photoshop.


Create and avatar skin based on the Na'vi characters from the film Avatar.

Characters (Clothing is spy):
Agent 1: waiting in the public place.
Agent 2: Approaches Agent 1 and offers information in the form of an object
Agent 3: Interrupts the transfer of the object from Agent 2 to Agent 1.

Agent 2 flees the scene. Agent 1 confronts Agent 3.
Posted by James Barrett at 1:39 AM

Augmented reality isn't the absolute solution to [moving problems], but it's a start, making that pain point a little bit easier..