Using a Virtual World in Learning

The idea that computer games and learning can be combined is not so radical. Digital games for learning are now being used (Myst for Writing) in classrooms all over the world.

What is difficult is assessing the effectiveness of games in learning.
(If you are interested in research comparing computer games, serious games and simulations to other instructional methods, then here is a definitive list of resources and references.)
Combined with the need to understand what is effective is the need to meet the learners half way, to find tools and opportunities for learning among what is already part of the creative life of students. In this brief presentation I want to present some ideas around the very popular online virtual game world RuneScape and learning.

RuneScape is a fantasy massively multiplayer online role-playing game (MMORPG) released in January 2001. It is a graphical browser game implemented on the client-side in Java, and incorporates 3D rendering. The game has approximately 10 million active accounts, over 130 million registered accounts, and is recognised by the Guinness World Records as the world's most popular free MMORPG.

In terms of learning, RuneScape has potential related to languages, literature, culture and international studies. Firstly in relation to language learning:

a) RuneScape runs on 171 English servers located throughout the world, which are numbered and referred to as worlds by players. They are located in the United Kingdom, the United States, Canada, the Netherlands, Australia, Sweden, Finland, Belgium, Ireland, Norway, Denmark, New Zealand, Mexico, France and India. As well as the English language servers there are five German RuneScape servers, two French servers, and five Brazilian Portuguese servers. Combined the RuneScape server network is a potential resource for language learning. I have only played in English, but RuneScape is a well thought out system when it comes to language. Players learn directions, objects, tasks, and conversation. Making RuneScape a part of classroom learning would involve setting specific tasks for students to perform during their play. One example could be the compiling of lists of verbs. Once the list of verbs is complied from RuneScape play, they could be used in written composition in the classroom.

b) As the above example from Myst shows, virtual game worlds can be used to inspire creative writing in students. Screen capture of game play (still and video) from RuneScape can be used in the classroom for writing exercises. 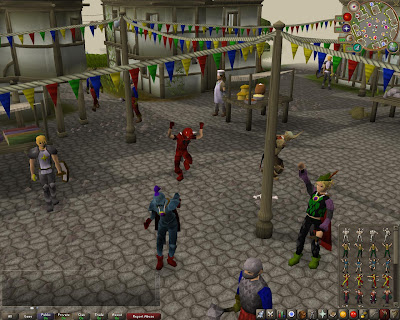 This image is taken directly from game play in RuneScape, it speaks of medieval European history, the market square and it's role in public life as well as costumes and characters.

Incidentally, the gender bias towards males in RuneScape is acknowledged on a number of player websites. The vast majority of RuneScape players are reported as male. This may prompt using another game or virtual world site in learning. The perceived dominance of males in such a digital game space can also be a part of a school project that introduces learners to gender concepts. Girls and gaming is a huge area in research and the community of players.

c) RuneScape is a cultural artifact. I have already mentioned the fantasy genre to which it belongs, as well as its references to historical tropes, and the questions that it raises regarding gender . These elements of the game can be used for learning. According to one fan site:

With millions of young people playing RuneScape (including many in Sweden) it is an important form of media that needs to be learned and understood by educators and parents. RuneScape is a rich cultural and creative field. At least one fan forum is already setting up lessons in Swedish language and culture for English speaking players:

"Hello all. My name is Keaton. I recently visited the Swedish forums to see what it like. I liked what I saw and wanted to have more english players take advantage on learning a new language. That is why I am opening a clan chat that will let english players intract with swedish players! People could teach people about there culture,holidays and the language! If this is in the wrong forum please move it to the best spot.

1. All Jagex rules apply.
2. No spamming, swearing, buying/selling, advertising other cc's.
3. Respect other peoples cultures,holiday and words in there language.
4. YOU must have fun!"

Such sharing in digital spaces brings with it great opportunities. These should not be wasted as learning from them has the potential for great rewards, especially when one considers the present day demographics for online virtual worlds such as RuneScape: 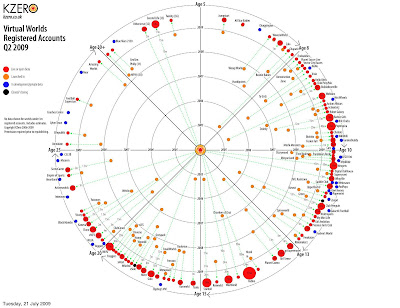 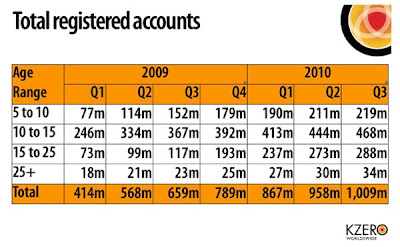 It is estimated that there are over one billion registered accounts in virtual worlds today. An estimated 700 Million of them are under the age of 15. The future awaits us.........
Posted by James Barrett at 1:42 PM

ROBLOX is driven by an ever growing community of more than 300,000 creator players who generate an infinite variety of highly immersive experiences.

These experiences range from 3D games and competitions, to interactive adventures where friends can take on new personas discovering what it's like to be a dinosaur, a miner working a mine or an astronaut out in space.

This is very interesting. A lot of thoughts to be learned from this site.