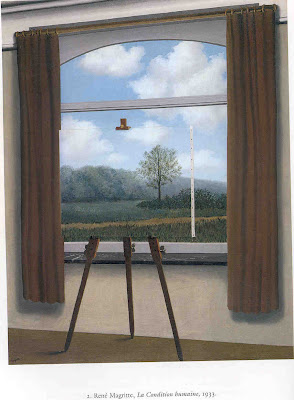 "Space is at once result and cause, product and producer; it is also at stake, the locus of projects and the actions deployed as part of specific strategies and hence also the object of wagers on the future - wagers which are articulated, if never completed" Henri Lefebvre, The Production on Space (1991)

"In these moments of heterogeneous entanglements of the social, political and technological space the meaning of the game as an entertainment tool transformed into a tool for public opinion expression and reflection." S. Lidtner, B Nardi et. al. A Hybrid Cultural Ecology: World of Warcraft in China (Forthcoming)

Hybrid, mixed or augmented space is produced by physical and mediated means. While anchored in representative technologies, the mediated elements of a hybrid space can be experienced in an immediate and fully embodied physical sense.

Perhaps the public face of augmented space at the moment could be assigned to the Nintendo Wii game console:


"Wii sounds like 'we', which emphasizes that the console is for everyone. Wii can easily be remembered by people around the world, no matter what language they speak. No confusion. No need to abbreviate. Just Wii." Nintendo anticipates worldwide sales of the Wii to reach 50 million units by March 2009.

My intention with referencing the Wii is to present a relatively established, although recent, concept as indicative of augmented or mixed reality space. From the fairly linear and demarcated system which defines the Wii I hope to move into more complex, nuanced, distributed and fragmentary examples of such hybrid spaces. 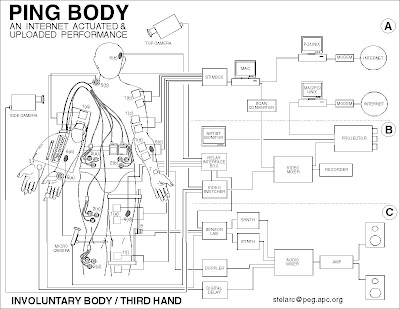 The Ping Body by Stelarc
Primary to space is the body. Inhabiting space as embodied is explored by the Australian artist Stelarc, whose work raises questions concerned with the body.

Players streaming into Astor Hall at the New York Public Library on Friday to play video games on the Wii, Xbox 360, PlayStation 3 and other systems.(New York Times)

Museums, libraries and teaching spaces are in themselves examples of 'mixed reality' space based on the concept of information spaces. How augmented reality can be developed in such environments is just beginning to unfold in the present time.

In January 2008 a event with the title “House of Sweden goes Virtu-Real” was staged. A function was held at the actual Swedish embassy in Washington DC, The House of Sweden. At the same time the Second House of Sweden (an exact scale model of the Washington House) held a function. Linking the two where two interactive video walls
in each location and a telephone link allowing for conversation between the two. 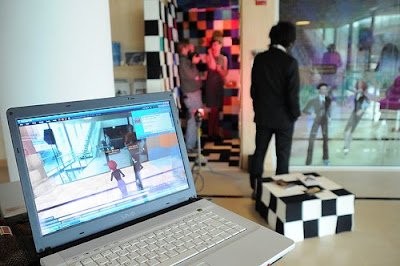 Installation of the video wall in Washington's House of Sweden. 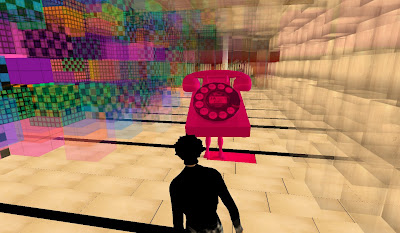 Looking through the video wall, with telephone, from the Second House of Sweden.

The Second House of Sweden is an innovative project exploring concepts of branding on the global scale, hybrid space, presence and representation.

Tagging
The concept of tagging, attaching a word or key phrase to a web page or blog entry is well established on the contemporary internet. The use of Radio Frequency Identification Devices (RFIDs) to tag objects and places is a way of creating augmented spaces. The use of RFIDs for education, information distribution and storage and art has only just begun to be explored.


Presentation of the Augmented Reality installation at the Open Day of the Royal Academy of Art (KABK) in The Hague, The Netherlands - January 27, 2007

Alternate Reality Games (AGRs)
An alternate reality game (ARG) is an interactive narrative that uses the real world as a platform, often involving multiple media and game elements, to tell a story that may be affected by participants' ideas or actions.
The form is defined by intense player involvement with a story that takes place in real-time and evolves according to participants' responses, and characters that are actively controlled by the game's designers, as opposed to being controlled by artificial intelligence as in a computer or console video game. Players interact directly with characters in the game, solve plot-based challenges and puzzles, and often work together with a community to analyse the story and coordinate real-life and online activities. ARGs generally use multimedia, such as telephones, email and mail but rely on the Internet as the central binding medium.

The production of space in an ARG can blend the physical with the virtual, or enmesh a mediated space with the familiar physical space of a neighbourhood or work environment. ARGs are geo-spatial, multi-modal, mobile and intermediated. One of the most recent ARGs is Traces of Hope, commissioned by the British Red Cross:

Vicious war in Northern Uganda has destroyed Joseph’s home and torn his family apart. He has one goal, to find out from the Red Cross if his mother is alive or dead.
Now he has arrived in the dangerous refugee camp they call Hopetown, he has 24 hours to track down the Red Cross messenger and he needs you to be his guide.
He has a satellite phone, you have the web – together you’ll make a great team. Time is running out; guide Joseph through sickness, fire and violence as together you follow his traces of hope.
Register to Play

Art as Augmented Reality
Art has long been a source of experimentation and investigation in regards to the potentials and boundaries of reality. In the field of augmented reality art is at the forefront of experimentation with the technologies available for blending and creating new forms of space.

Sheldon Brown (Director of the Centre for Research in Computing and the Arts at UCSD) is in my opinion one of the more interesting artists working in the area of augmented reality. Such projects as Mi Casa es Tu Casa result in a production of space that is hybrid, distributed and networked. 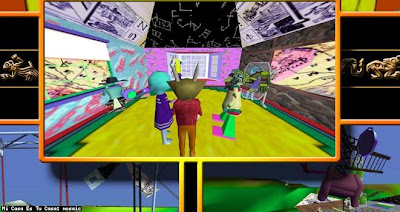 Mi Casa es tu Casa uses the contextual apparatus of museums with adjacent mission scopes to the art world, for bringing avant-garde strategies to engage ranges of social issues to venues that often use more pedantic forms of discourse." (Wikipedia)

Finally I would like to name a large scale project which problematise generally conception of space as physical and static. The Avatar Orchestra Metaverse (AOM) uses augmented reality technologies to articulate subjects as distributed in mixed or hybrid space. 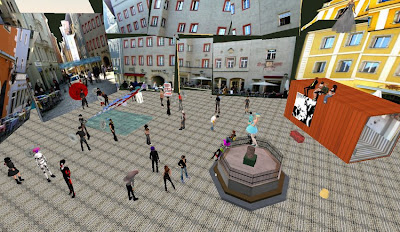 The Avatar Orchestra Metaverse is a large group of new media artists and musicians which use Second Life as a space for coordinating and staging multimedia performances in real time over distance. These performances are achieved through the use of fast broadband internet connections and HUDs (Head Up Display) devices which allow for the running of samples from a central server. The effect created by the AOM performance creates an impression of shared space and immediacy.
Posted by James Barrett at 10:54 PM